The image below shows the light coming from the parallel beam projector PB70, shining onto the hard, big 3 x 3 ft (100 x 100 cm) reflector R1, which is redirecting the light. Redirecting the light does not change the character, nor does it influence much the beam angle of the redirected light.

It might be mentioned that when reflector R1 is placed in an ideal position, redirecting the light coming up from street level, it should possibly be placed in such a way that the view out of the window may remain totally unhindered, adding further possibilities in the creation of a natural light simulation.

Re-reflecting the light several times allows to reach different areas of the set. This makes it possible from a single light source, to have the effect of lighting coming from many different directions.

Being able to vary the depth of insertion of the reflectors, deeper or less deep into the narrow redirected beam of the reflected light, works like an opto-mechanical dimming, where only as much light can be used by the reflector, reaching into the beam as it takes out of the beam, depending on the surface that is hit by the incoming light, and thus, it brings with it a very elegant and convincing method of influencing the amount of light to be used.

As mentioned previously, the effect of harder or softer light is not directly dependent on the angle of light exit from the reflector, but mainly by the surface area of the reflector used. The larger the area used on the reflector is, the softer, the gentler the function of the light, and the shadow edges will appear gentler and more with a soft transition when a larger area of a reflector is used.

This is often confused with the amount of light, but then again the perception of a soft light, as depicted in the final image, is dependent on the size of the actual light-emitting area. 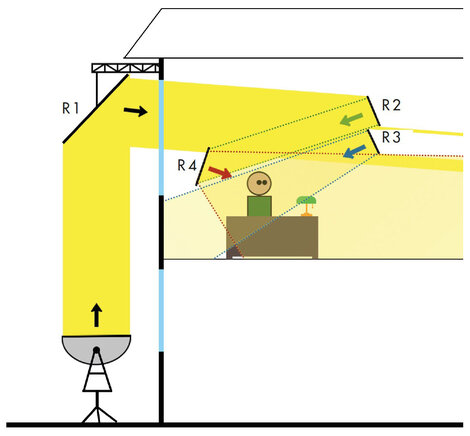 This system’s explanation refers to the basic setup as we have shown in the video.

Here again we see the big 1200 W parallel beam light placed at street level, shining into a 100 x 100 cm reflector R1, which redirects the light to the window on the second floor.

This of course can be done in such a way that the view out of the window is perfectly unhindered.

This redirected light then is split into 2 further reflectors 50 x 50 cm, where the upper one re-reflects the light towards the reflector, providing the fill light, whilst the lower one provides the direct key light on the person behind the desk.

In this example we see a DLED7 focusing LED dedolight 90W, combined with a parallel beam adapter, shining straight upward onto the reflector R1, which redirects the light onto reflector R2, where you can see, that here the light is already being spread with a larger exit angle, now reflecting the light onto the third reflector, which could even be the reflector R3, providing from its entirety of the surface a gentle soft light with lower intensity because of its large spread angle.

This picture shows the same situation, where the focusing dedolight LED light is now replaced with a laser pointer, shining up onto reflector R1, where we can see the laser beam is redirected with very little change of its character onto a reflector R2, which shows a reflection in a much wider angle, pretty much filling reflector R3 at the bottom of the picture for gentler light reflection.

Using a laser pointer to shine up onto reflector R1 we can see that the laser beam is redirected with very little change of character. Reflector R2 already shows in its reflected light a wider angle, pretty much the entire surface area of reflector R3 on the bottom for gentle light.