The high efficiency of these reflectors within this system derives from reflective values, where approx. 95-98% of the light can be effectively reflected.

Reflector #1 is the closest to a very hard reflector, but it is not a mirror. A fully functional mirror usually would not work well for this kind of lighting system, it would not redirect the incoming light, the beam with sufficient homogeneity.

Reflector #1 serves the purpose of redirecting the light without changing the beam size and the beam character. The attempt here is to cause a minimum of stray light and a minimum of diffusion. This surface structure provides reflection with an exit angle of about 4°.

The enclosed measurements were done with a DLH400D metal halide light with the parallel beam adapter, using reflectors 15x15cm.

For comparison purposes we have included a styrofoam surface.

As you can see, reflector #1 has the highest intensity of reflecting light when measuring in the center of the reflected light.

We have explained the term ‚virtual lightsource’.* From the graphics you can see that the light used in this example with reflector #1 will provide a virtual light source behind the reflector.

Here, in this example the distance from light fixture to reflector is 1 meter. The virtual light source behind the reflector would be at 150 cm. 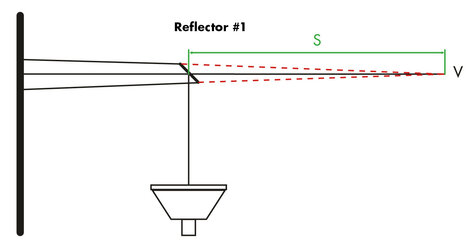 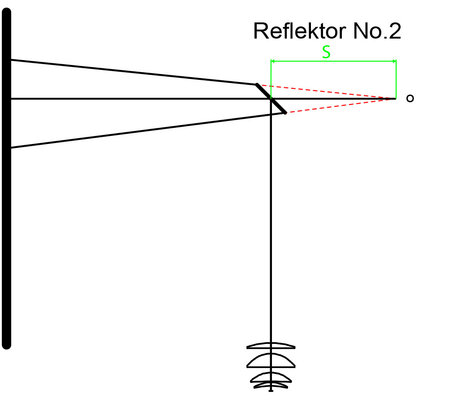 shows less light intensity at the object, although the total amount of reflected light remains pretty much identical with 95-98%, but due to the wider exit angle of 12°, it makes it more suitable when we want to arrive in the next reflection from the secondary reflector with a larger surface.

It appears to be much gentler, although again the same amount of light gets reflected, but spread over an angle of 50°. 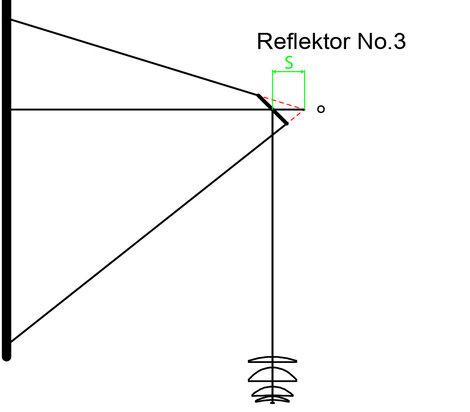 which produces seemingly the most gentle reflection, covers an angle of 95°, and thus, lower values of light level reaching the object, and the virtual light source now, coming very close to the reflector surface, only 4cm behind the reflector.

When comparing Lightstream reflector #4 with the commonly used styrofoam, we have comparable values of light intensity reaching the object. Thus, we now have to assume that the theory and practical function of the virtual light source, as generated by reflector type #1, may drastically change the influence of the square law, minimizing the differences in exposure value, when our talent is moving.

This effect is minimized when we use reflectors #3 and #4, or a styrofoam.

The actual size of the reflector in relation to the distance to the lit object determines the perception of hard and soft light* - the light and shadow transitions.

This one reflects in a more distinct direction.

You can spread the beam and orient it.
The special effect of this reflector is that if you use it close to the light, or close to a #1 reflector, the spread edges, the transition between light and shadow, will be relatively gentle.

For more details and a short demonstration video click the button below. 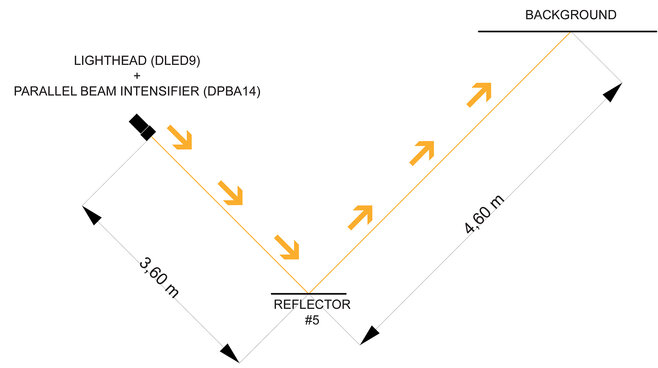 Here we are talking about two different aspects.

On the one hand, the characteristics of the different reflector surfaces play an important role between the hard, narrow exit angle from reflector #1, which I prefer to call the one to ‚re-direct’ light, whilst #2, #3 and #4 I call reflectors, because they have a larger exit angle.

The effect of the light, reflected from reflector #1 is hard and selective, it does not change the incoming beam character. It is merely re-directing it.

Whilst the reflected light from reflector #4 exits in a very wide angle and covers an enormous area, and therefore sometimes is hardly noticeable, it is an ideal tool as a base light and for ambient light.

Again, we have to point out that there is often a misunderstanding, where reflectors with a narrow angle of exit, like #1, are seen as hard reflectors; and it appears to the eye and the camera that a lot of light is reflected, whilst reflectors that have a large exit angle and cover a huge area, are often seen as reflectors that reflect less light and therefore are perceived as softer and gentler, but may still produce identical light and shadow transitions.

In effect, all these reflectors have in common a very high degree of reflectivity (above 95%) but that the reflectors  which appear softer and gentler, spread the light over a wider area.

On the other hand, it has to be noted and taken into consideration that the surface area of a reflector that is actually used by the incoming light defines the character modification between hard light and soft light. Even if we take a reflector with a large exit angle, like #3 with 50 degree exit angle, and light only a small part of such a reflector, it will appear as a hard light, and shadow edges will be relatively hard.

If the entire surface area of a larger-sized reflector is lit by incoming light, it will have more the effect of a soft light.

Sometimes, for some of us it is difficult to understand that the seemingly gentler reflector which produces the very large exit angle, like reflector #4, appears to be soft, simply because it is reflecting less light as noticed by the eye of the viewer. But for the characteristics of a soft light it is exclusively the size of the area of light emission, in relation to the distance to the object.

If we have a large area reflecting light, and an object close by, this will be practically shadowless light, or if there is any shadow noticeable, the transition between light and shadow will be a fluent, transparent transition, whilst if the same size of area of light emission is further away, the impression will be that this is a harder light, and it will produce harder shadow edges.

To give an extreme example –

The sun has a huge diameter, but is very far away, thus the huge area of light emission from the sun, by the time it reaches us, will produce very hard shadows; whilst the other way round, a huge surface soft light, like we have with our Panaura5 and Panaura7, when the front diffusor is lit all the way to the edges, defeats the function of the square law.

So shadow transitions are very smooth, if the object is close to the front diffusor or area of light emission.

When thinking about reflected light, we don’t necessarily have to think of size and character of a reflector as described in this brochure. We can think of the table cloth on the dinner table, the floor, the ceiling, the wall of a room, as a soft light source.