dedolight Lightstream and Eflect are the names of our new lighting tools and practices.

The tools also include a selection of reflectors with a selection of very efficient reflector surfaces, with a variety of functions, and are available in different sizes.

I - The parallel beam light

There are several other parallel beam lights known throughout the professional industry, but our users find that our DPB70 parallel beam light excels in extremely high efficiency and unprecedented homogeneity within the beam, which is a prerequisite for the Lightstream lighting system.

The DPB70 has its name deriving from its diameter of 70cm. It works with a very special HMI lamp, produced exclusively for our light, according to the high demands for output, as well as homogeneity of the parallel beam.

In general, reflecting light is a well-known and established practice in image creation and for special effects, but within the dedolight Lightstream system it attains perfection, making it uniquely suitable for the many different ways and uses of this system in lighting practice.

Some of this derives from the use in feature films and drama productions, where it has been used also with great purity and exclusivity. (For example, by the Austrian Director of Photography Christian Berger and his experienced gaffer Jakob Ballinger in films by the Austrian director Michael Haneke, as well as in the Brad Pitt and Angelina Jolie film ‚By the Sea’.)

We have taken these systems further and expanded the range of tools to an unprecedented choice.

There are other parallel beam lights in pre-production stage, which we will add at a later date.

The other group of exquisite tools is based on dedolight  focusing lights.

The dedolight focusing lights already excel in their optical system, which, among other features, increases the efficiency in spot position, as opposed to traditional studio Fresnel lights by 300%.

Furthermore, focusing dedolights are known for their unique, patented, non-spherical double-lens design, which provides a perfectly smooth and even light distribution within the beam - we call it the:

Clean-Beam Concept  – perfect light distribution within the beam, outside the beam - nothing.

A system and a function that is absolutely unique, and in combination with double and triple movements of the focusing optical elements has been awarded twice by the Oscar Committee of the Academy of Motion Picture Arts & Sciences, and an Emmy.

As an extension of the computer-correlated design, matching the unique dedolight optics, we have now designed and produced parallel beam attachments, (special optical devices).

Not only do they provide a very clean parallel beam with great homogeneity within the beam and great definition, but the amazing fact is that these parallel beam attachments double and triple the light output over the spot position of the focusing dedolights, which were already three times more efficient and powerful than the spot performance of traditional studio lights.

So this is a huge additional step forward.

Furthermore, they are uniquely qualified tools feeding into dedolight Lightstream and Eflect practice.

Such unique reflectors are available in different sizes from 1x1m to 50x50cm, to 25x25cm, even down to small ones with 7x10cm.

Other reflector sizes and functions are being developed.

This is a system which usually includes the big parallel beam light DPB70, augmented by other focusing dedolights with the unique parallel beam adapters.

This can provide a feeling, character and function of natural light by the characteristics of the parallel beam lighting system. Its practical effect is not based on the distance between the light fixture and the object, but works effectively like a virtual light source from an enormous distance, thus allowing a more natural character of lighting on a set, on a person, on a subject, at the same time eliminating a lot of lighting paraphernalia, stands, flags and other devices that usually clutter such sets.

It also allows for enormous efficiency and very structured lighting, often giving the illusion of depth and space in the resulting images.

This is the transformation of the concept of Lightstream lighting for television studios, where our focusing lights, in conjunction with the amazing parallel beam adapters, can serve a multitude of reflectorsefficiently allowing the lighting of complete sets even in such a way that different positions of actors, presenters or objects can be pre-lit without the need of adjusting and re-setting all the tools.

Here we achieve an extreme degree of efficiency, unique in lighting practice for TV studios. We have produced a video demonstrating a studio simulation, where, with a mere 790 Watt we achieve lighting with lux values, comparable to studio lighting, previously done with 30kW or more.

Two other practices and applications:

Eflect and miniature Eflect systems for table top and photography, which will be explained later on in this brochure (page ref.) 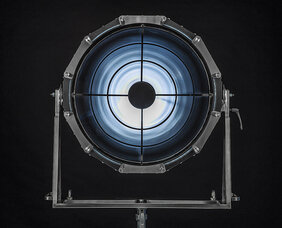 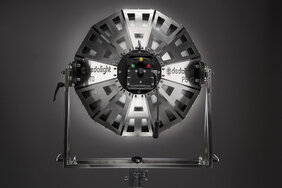 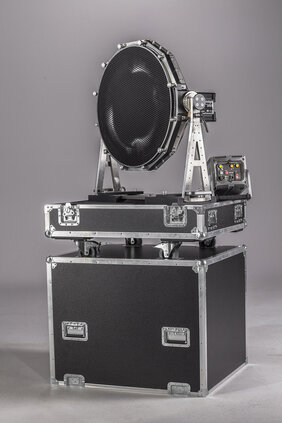 The DPB70 is the largest and most powerful of the parallel beam lights, mainly directed at the use in Lightstream Drama applications. Beam projectors have been known in our industry, but this one is different, as much as it offers a very defined beam, and at the same time a homogenous light distribution all across the beam.

The beam has an exit diameter of 70 cm, 27.5 inches. This parallel beam light fixture can be used for the appearance of a natural light source, being far away by virtue of its character, and its over-ruling of the square law. For this reason, this light fixture has already been chosen for some major film projects to simulate sunlight because of its natural and unique character.

When operating this light fixture with reflectors, there is a choice of the largest reflector that we currently provide, using a 100 x 100 cm reflector surface (usually the # 1 type) to redirect the light in an opportune direction, without much change to the beam diameter and the beam character, and without causing much noticeable stray light. Especially, when such a large reflector, redirecting the entirety of the beam, is  used, the result is a virtual light source at considerable distance. Thus, talent/actors are able to move in the reflected light, without diminishing light intensity when changing position.

This lighting instrument can therefore be used with a large reflector to redirect the light beam in its entirety, or can be used with a multitude of smaller reflectors, to direct parts of the beam in different angles and directions.

Often, a multitude of reflectors is used for secondary and third reflectors, to change the direction of the light, to change the character of the reflected light, and thus, lighting entire scenes from a single light source. The side effect of such lighting practice is to eliminate a lot of lighting paraphernalia from the set without cluttering the set with many fixtures, lighting stands, flags and other instruments.

Sometimes the entire diameter of the parallel beam gets redirected by a large reflector (1x1 meter), no. 1 type.

Other times, several smaller reflectors share the beam to redirect the light simultaneously to several directions and further reflectors.

The deeper you insert the reflector into the beam, the more light becomes active. Thus, you choose a level of intensity without changing color or character.
(You could call this: opto-mechanical dimming)

The Lightstream beam light and reflector systems’ great achievement consists in the fact that we achieve all this without altering the color quality or character of the initial light.

The DPB70 light is powered by the dedolight DEB1200D flicker-free ballast, which also allows dimming of the light source up to 40% and operates quietly and can be controlled by DMX signals.

The DPB70 is rainproof and therefore suitable for lighting setups in exterior and continuous use, even under adverse conditions.

The beam can further be cleaned from remaining parasitic light by adding a honeycomb, which reduces the light output only minimally.

A filter holder can be added for total or partial filtering with gel filters.

A transport case is available (Code: DCHD70) to receive the light head, as well as the ballast or necessary cabling, and three sets of reflectors, as well as a choice of mounting/grip equipment. 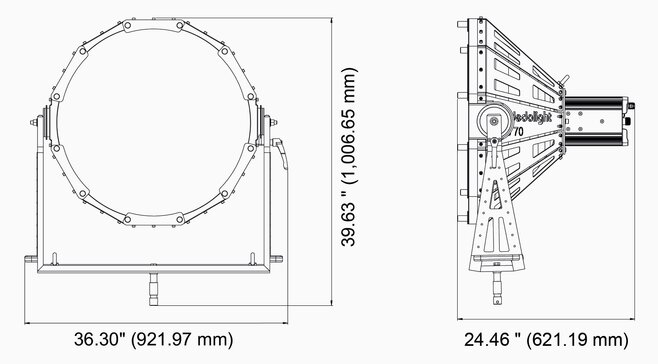 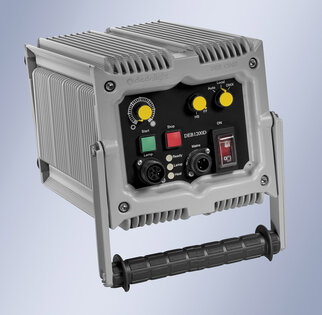 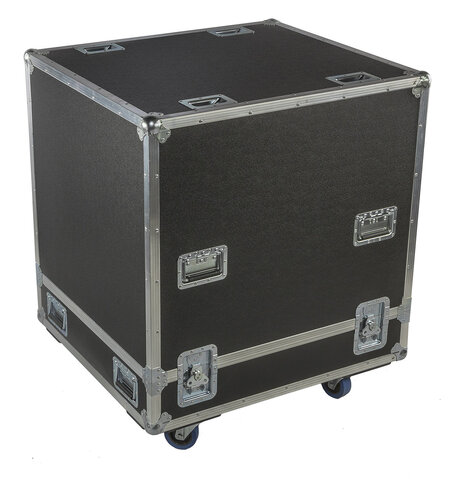 The Hard Case for the PB70 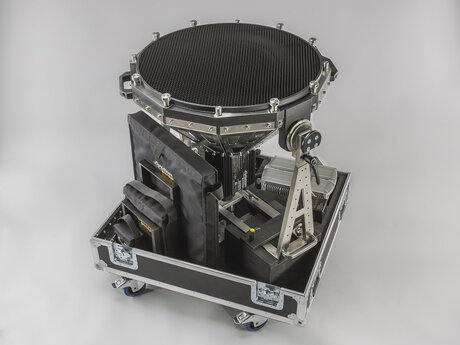 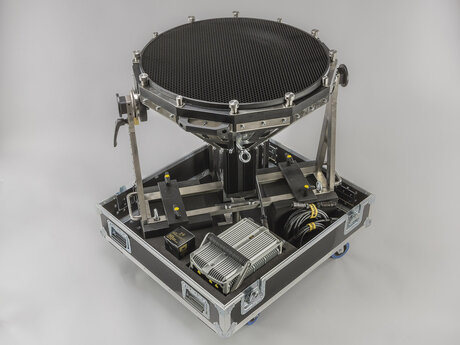