Although Lightstream technology and other practices of lighting with reflected light, like CRLS, the system used for major drama productions, originally by Christian Berger and Jakob Ballinger, were originally intended for major drama productions only and have proven to be very successful in this field, we have, with our more highly developed technology, expanded these practices for the lighting of television studios.

only exclusively, but also in combination with other dedolight light fixtures, to provide a choice and variation of characters.

and energy consumption and fixture inventory while extending creative possibilities. It also offers a very interesting choice of easy and quickly installed lighting, which can be set for different positions of persons or sets to be lit, and it is also eminently suitable for multi-camera work.

Many different lighting situations can be preset

and prepared with great ease, and can be lit simultaneously, or chosen by simple changes of the control on the DMX boards or other remote control systems.

In the following pages, we are explaining lighting systems and simulations, not actually showing television studios being lit, but simply trying to give an explanation of the instruments and tools, which can be used for such lighting practice. Also proving the functionality of the system.

In addition to our parallel beam light fixtures and the tremendous choice of super effective parallel beam adapter, we have now also added motorized reflectors, which can be controlled by cable and DMX, and in future also by wireless control, adding to the ease of changes of lighting setups, if it is not practical to pre-light many different lighting situations from the beginning (which is also possible with these tools in very simple practice). 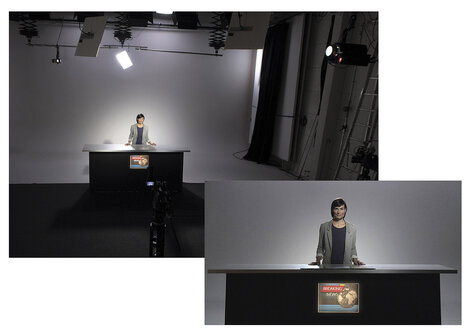 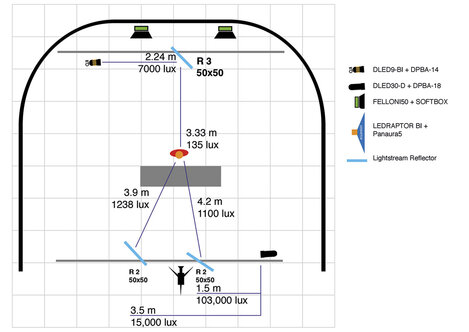 In the photo on the right, we see that the frontal lighting is done with one DLED30D with DPBA18 parallel beam adapter and two reflectors 50 x 50 cm.

The distance from the light fixture to the first reflector is 1.5 m, to the second reflector 3.5m.

In the back we have light shining in the other direction, a DLED9 bicolor fixture with parallel beam adapter DPBA14 onto a single reflector 50 x 50 cm, providing a back light of 135 lux.

Further in the background, pointing downward, are 2 Felloni standard lights 50° with soft box.

In the long shots of these pictures you will see several other lighting fixtures on the ceiling, which happen to be in the studio. We left them, but they were turned off. 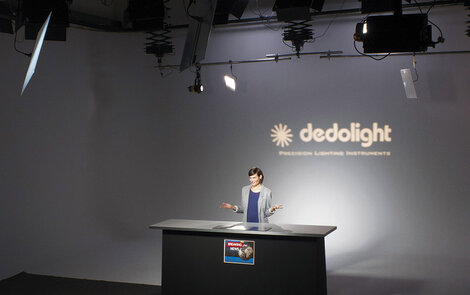 Lighting a single person / announcer with 2 back lights

In the photo on the left, the setup is similar to the one described above, except that this time the DLED9, 90W LED light is lighting 2 separate reflectors to give more sculpturing to the person from the back lights.

Now we have 250 lux on both back-lighting reflectors.

In the background you also see a gobo projection which is easily interchangeable. 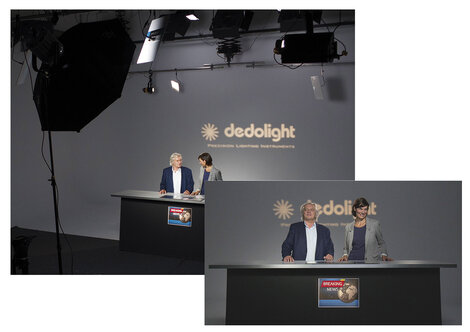 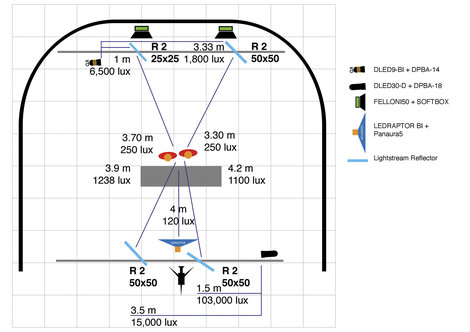 Same news room simulation with 2 people, but this time with the addition of a tunable Ledraptor dedolight soft light in bicolor version with 1.5m diameter of the diffusor. Allowing fine-tuning of a gentler lighting approach. Mixing structured reflected light and dedolight softlight. Adding the option of warmer hues (bicolor) or cooler look. 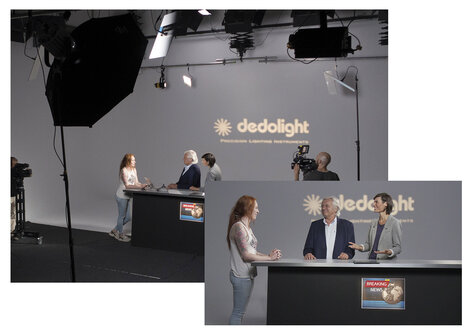 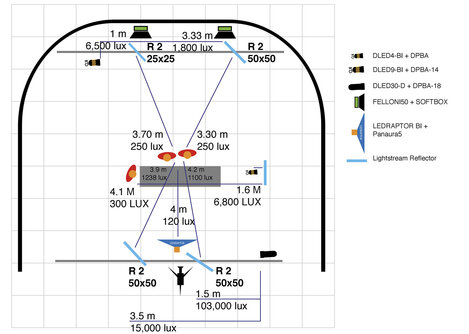 Same news room simulation with 3 people, adding one extra dedolight and a reflector for the third person.

Example of a challenging task for Lightstream TV

Not long time ago we lit three news studios in record time. From the beginning to going on the air, everything was achieved for all three studios within four working days.

We did not use the Lightstream TV reflected light system exclusively. We used it in combination with several other dedolight lighting instruments. In this this case, the difficulty was that an entire side of the studios is a window, looking out to a full daylight situation (the open sea). In addition, we had to take care of varying positions (directions) of the anchorman and his guests, and had to take care of the varying lighting situations of the exterior background, from full sunlight to night.

We didn’t have much time to document all of this, but here is a first video, explaining what was done and how it was done under the following link.

For the lighting of television studios, the Lightstream approach offers very attractive solutions. For some of these installations we have not applied the reflected light practice with total exclusivity, we mixed it intelligently with other light fixtures and solutions from our LED range. Still, the overwhelming majority of lighting was created by the Lightstream reflected light system. 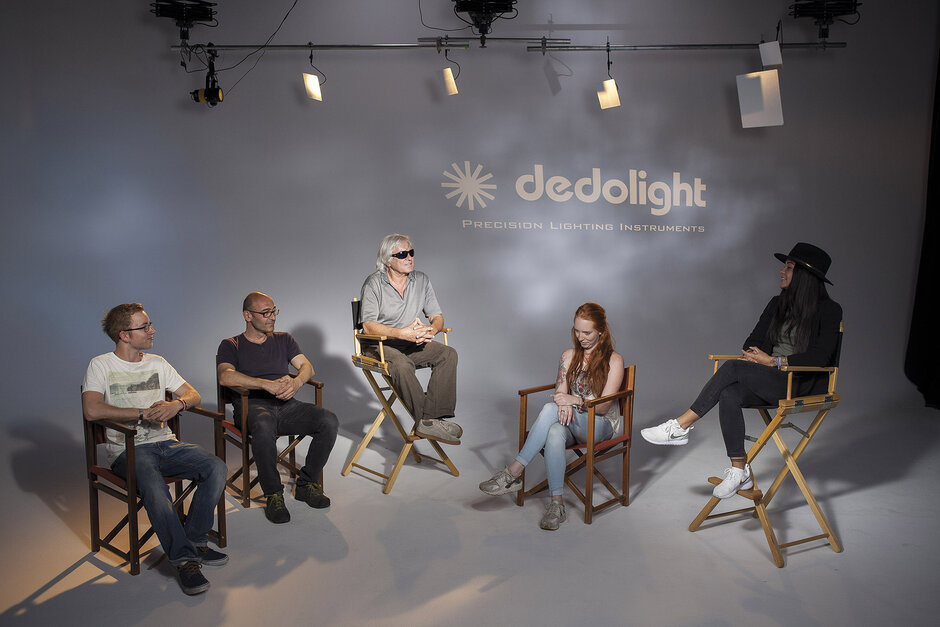 The setup on the prior page, lighting the talk group, is quite interesting, since all the people-lighting is done with simply 2 LED light fixtures. Again, the DLED30, a 300W dedolight LED light, fitted with parallel beam adapter DPBA18, lights from right to left 4 different reflectors, whilst a single 90W DLED9 bicolor with parallel beam adapter (DPBA14) lights 5 reflectors for the back light.

In the background there are two simple Felloni lights with soft boxes pointed downward.

A dedolight LED Ledraptor soft light was gently filling in like melting together in a very subtle way the effects of the reflectors.

The back wall shows lighting with 2 DLED7 light fixtures, directed at Eflect background effect reflectors for the irregular spotty, and to some extent color-changeable background.

You can see a dedolight logo projected on the back wall from a DLED7 light with DP1 projection attachment.

The interesting fact is that by simple control of one light in front, the DLED30, shining at the 4 reflectors, and the DLED9, 90W light, shining at the 5 reflectors in the background, a total change of mood and lighting effect can be achieved. From moody silhouette lighting to more gentle lighting. Balancing between the reflected lights and the Ledraptor further allows gentler or more dramatic lighting situations, just by moving one slider on the control panel.

All of these simulations are just meant to show the potential of using reflected light for TV studios with great efficiency and very interesting creative potential, perfectly suitable for multi-camera shooting.

This is just a presentation of our system’s approach which can be modified and tuned for many different styles and moods, and situations in television studios. 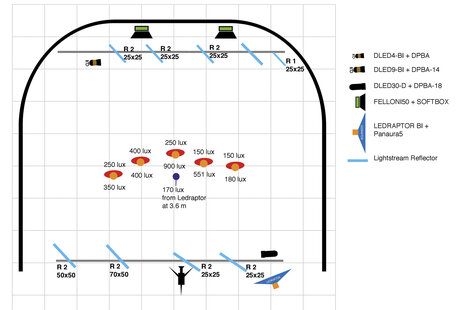 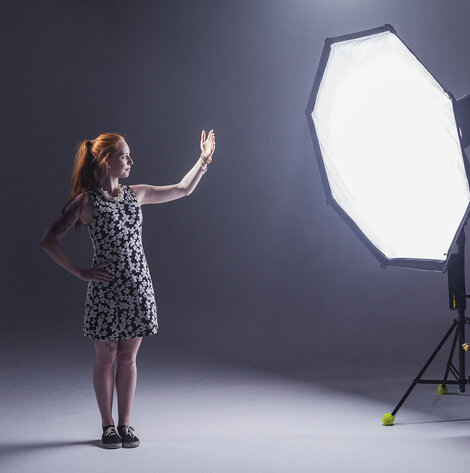 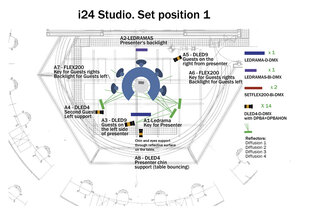 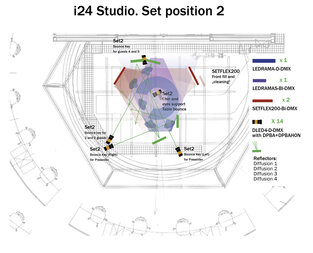 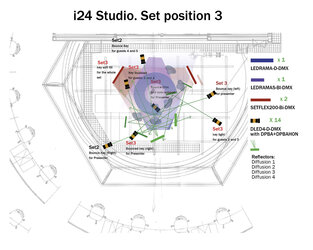